Significant Increase in Bicycle Accidents Across the Country 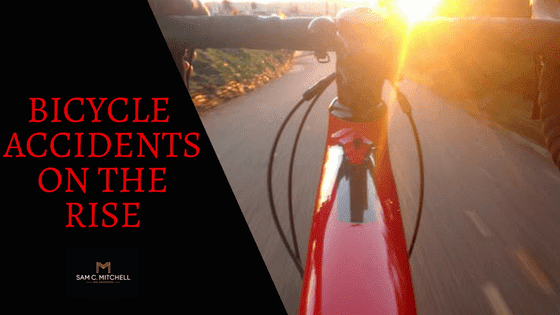 Summer means dusting off the old bike and hitting the road for a family bike ride. Before you head out, make sure to read up on some bicycle safety. Bicycle use has increased in popularity but it has also led to more accidents. According to a study by UCFS, there were 3.8 million non-fatal adult bicycle injuries and nearly 9,839 deaths that were reported across the country from 1997 to 2013. These crashes primarily occur with motor vehicles which increase the crash impact and the severity of the injury. Bicycle deaths increased by 19 cases a year. A large percentage of the accidents could have been avoided if motorists and cyclists followed the rules of the road.

According to the study, medical costs is roughly $789 million annually from bicycle accidents. Over a 17 years period, medical costs of bicycle injuries to adults in the U.S. both fatal and non-fatal accounted for $237 billion and in 2013 alone $24.4 billion.

Before hitting the road, it is important that you educate yourself and others about bicycle safety. According to the law, bicycles on the roadway have the same responsibilities as motor vehicles.

If you have been seriously injured from a bicycle accident, contact our experienced Illinois Personal Injury Attorneys at 618-932-2772 or via our convenient online form. Sam C. Mitchell & Associates has been serving Illinois for almost 50 years and has recovered more than 100 Million for our clients.