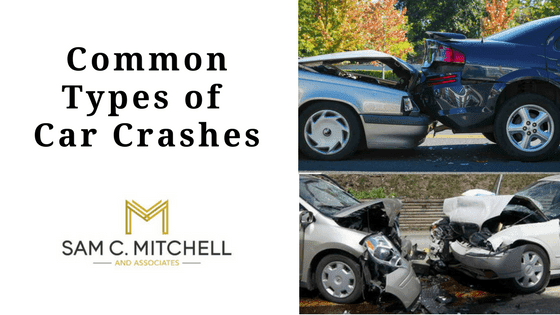 Car crashes happen every day and some types of accidents are more common than others. Below our experienced attorneys break down each accident type, why they are so common, and how you can protect yourself while on the road. The most common types of car accidents are:

A rear-end collision occurs when a vehicle crashes into the one in front of it. Common factors contributing to rear-end collisions include driver inattention or distraction, tailgating, and panic stops. In fact, rear-end crashes are the most common type of collisions because of distracted driving.

According to the National Highway Transportation Safety Administration, rear-end crashes are the most frequently occurring type of collision and account for approximately 29 percent of all crashes. They also claim that 87% of rear-end collisions happened because of a distracted driver such as texting, eating, interacting with passengers, etc.

One of the most common types of scenarios we have experienced as personal injury attorneys is when our client is stopped yielding to oncoming traffic to turn and then is rear-ended by the at-fault driver. Some tips to avoid these types of accidents include checking your mirrors frequently, turning on your blinkers way in advance if turning, and avoid slamming on your brakes.

Single Vehicle crashes are another type of common accident. A few of the most typical examples of single vehicle crashes include: drivers falling asleep, intoxicated driver, distracted drivers, mechanical failures, running into an object, weather conditions, and speeding.

In most instances, the driver will be held accountable however here are some situations when others may be at fault:

A T-bone accident occurs where the front of one car or truck crashes into the side of another vehicle. Usually these accidents happen when one of the drivers fails to stop at a stop sign or traffic light, or fails to yield the right-of-way to the other driver. T-bone or also called side impact accidents are often the most terrible kind of crashes, causing severe harm to those in the accident. According to the NTHSA, about 8,000 people are killed every year in the United States in T-bone collisions.

T-bone accidents are often caused by the at-fault’s driver’s failure to yield of give the right of way to other vehicles.

These types of accidents occur when two vehicles are driving next to one another in the same direction and the sides of the two vehicles contact one another. Sideswipe accidents also occur when one driver makes a lane change and does not look first before merging over. According to data by the IIHS, 242,000 sideswipe crashes occur every year.

Head-on collision accidents are probably the most dangerous type of crashes due to increased force sustained by both drivers. These types of accidents are many times fatal or result in serious injuries. These types of collisions are usually caused by negligent drivers including distracted driving, excessive speed, or a drunk driver.

Why You Need An Attorney

Being involved in a serious motor vehicle accident can flip your life upside down physically, mentally, emotionally and financially. The last thing you want to do if have to deal with the insurance companies alone. Sam C. Mitchell & Associates has been handling car accident claims for almost 50 years. Our attorneys are focused on your case so you can focus on getting better. If you have been in an auto accident, give us a call at 618-505-1660 for your free consultation.